The Fijian traditional system of ‘kerekere’ or borrowing is being blamed as one of the reasons why small village-based farming efforts do not succeed commercially. In a paper presented at yesterday’s Fiji Economic Update, held at the University of the South Pacific in Suva, Professor Ron Duncan of the National Australian University said the ‘kerekere’ system posed difficulties in the viability of indigenous farming businesses established within Fijian villages.
‘Kerekere’ is the Fijian custom of borrowing from kinsmen. It is shameful for a Fijian not to give something that is asked for within the ‘kerekere’ system.“Attempts to overcome this difficulty through the formation of joint-management groups within the village do not appear to have been successful, as they have proven prone to governance problems,” Duncan said. “There is still belief in some quarters in the viability of village cooperatives, but experience is such as to not inspire much confidence in this form of enterprise.”
Duncan’s paper discussed the failure of agricultural policymaking in Fiji.It paid much attention to prevalent government policy support and focus on state-driven large scale commercial agricultural enterprises which often left out small scale agricultural activities in Fijian villages.“The poor policies and projects that have been implemented by various governments appear to have their roots in poor understanding of the economic, cultural and social environment in which they are to be implemented,” Duncan said. He said small village commercial efforts would need to reach a point of effective management and control before they could realise commercial success.
“Experience of management groups among Maori tribes in New Zealand has seen greater success, where the need to ensure good governance and efficient management groups structures seems to have been realized. “Until this point is reached in Fiji, joint ventures between villagers and non-indigenous entrepreneurs might offer a better means of ‘quarantining’ village businesses from onerous cultural and social obligations,” Duncan said.
Posted by SDL Consultancy at 1:32 AM 0 comments 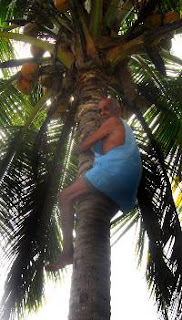 AT the age of 82, Sailosi Lalakoro is his clan's top coconut tree climber.
Whether it is sold in the village or by the roadside, money earned from selling coconuts has helped supply Mr Lalakoro's daily needs, especially transportation costs to Labasa town.
The Dreketi native, from Nabiti Village in Macuata, who is head of the landowning unit of Naikorokoro, says he never gets tired climbing coconut trees, no matter how high.
During village functions, he is always on standby to speed up any tree trunk to fetch coconuts.
Mr Lalakoro said that every time he is requested to head a team of collecting coconuts, he humbly accepts and does the job. Serving his people and mataqali is paramount for him.
Apart from serving his people in village functions, Mr Lalakoro also sells coconut by the Dreketi highway, one and a half hours drive from Nabouwalu.
Posted by SDL Consultancy at 8:21 PM 2 comments