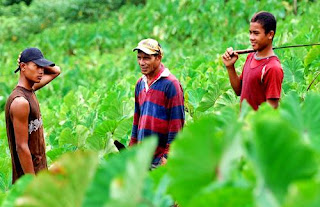 Fiji’s Native Land Trust Board (NLTB) is seeking legal advice on how to collect $25 million in rental arrears owed by native land tenants.
NLTB general manager Alipate Qetaki told FijiLive that the arrears are from the past 10 years.
“We are however trying out new procedures which have seen them recover $10m in the last 15 years,” said Qetaki.
He stressed that the NLTB could also issue a legal order to get tenants to vacate land immediately should they refuse to pay their outstanding debts.
“Legal action will be the last step taken as we will first follow the formal procedure of persuading tenants to slowly pay up their rent.”

He stressed against emotional involvement when dealing with the disciplining of subordinates.

“Let’s not be emotional with the decisions we make when dealing with disciplinary cases within the organisation,” he said.

“We need to stop abusing our powers and authority. Consider men under your command as an investment,” Mr Baleilevuka added.
“Let us not waste our resources by sacking personnel for issues that could be resolved within,” he said.

He added that disciplinary cases that can be solved within the Force needs to be done so. Mr Baleilevuka said officers all need to work together to see that the Fiji Police Force makes it through the challenges that life hurls their way. He has also stressed the importance of cutting costs within the Force.

All police personnel are required to assist in the cost cutting measures. He was appointed to the post last week and immediately implemented changes. The changes have seen the suspension of community policing initiatives that include religious crusades.The Public Service Commission has also advertised the post of Commissioner of Police.
Posted by SDL Consultancy at 9:21 PM 0 comments

Fiji to have national language

Talks have initiated on the need to have a national language in Fiji.

This was revealed by the Education Minister Filipe Bole in the launching of three i-taukei books at the Holiday Inn in Suva this morning.
Bole says the I-taukei Affairs Ministry initiated the talks – which he says he fully supports. Under the 1997 Constitution – which was abrogated last year – Fiji has three official languages – the I-Taukei, English and the Hindi language.
Bole says there is a need to have a common language that all people in the country can easily relate to.
“The national language – you can make it proper by teaching it in schools but the national languages are learnt in the streets. You can learn it too in the schools but when we take it to the schools – you come up with having a problem of teachers to teach – whereas if you go a marketplace – there are a lot of teachers in there.”
Meanwhile Bole says the three i-taukei books launched is an encouragement that the i-taukei language is to be kept alive.
The books were written by former school teacher and song and music composer Etonia Lote. He explains the three books.
“The I-taukei book called the “Moli Koula’. This is an I-taukei text book approved by the Ministry of Education to be used for Form 5, 6 and 7. And we have another one – the teacher’s guide. All of the solutions – the meaning of the i-taukei phrases from the text book is written in the teacher’s guide named “Na Uto ni Moli Koula.”
The third book is the Pupil’s Workbook. It is called “Na Coke ni Moli Koula.
The text book has 30 Units all together and every unit has a song.”
Click on links to discover:
From Village to City                VodaHost  Affiliate             HOLIDAY IN FIJI
Posted by SDL Consultancy at 11:23 PM 1 comments 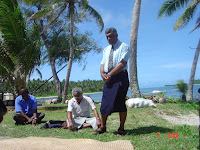 + Enlarge this image
Delegates at the Cakaudrove Provincial Council meeting yesterday
A PROPOSAL to increase the Cakaudrove provincial levy from $6 to $10 is expected to be tabled at the provincial council meeting scheduled for next month at Somosomo Village on Taveuni.
Roko Tui Cakaudrove Ro Aca Mataitini said the issue had arisen from the restructure of the provincial office budget in light of the fact that the yasana won't receive any Fijian Holdings dividends from the Itaukei Affairs Board next year.
FHL approved a $20million loan to the Itaukei Affairs Board to repay a $20m government loan that was used by the then FAB as equity investment in FHL in 1991.
"Since we are not getting dividends from next year for the next eight years we have to restructure the provincial office budget so the need for the increase in levy," he said.
"The province receives about $90,000 in dividends."
All Cakaudrove men registered in the Vola ni Kawa Bula must pay $6 including those residing out of the province and those married to VKB-registered women and living in the province.
So far, about $30,000 of the total levy of $67,000 has been collected.
"They have until December and we appreciate the fact that the levies have been coming in," he said.
"But from next year the timeframe for the payment of the levy will be from January to March and those villages that don't pay within the timeframe won't be visited.
"The levy pays for the village visits and other development work but the work is happening and the money coming in late.
"We can't continue to operate in this manner and we need to be strict."

The isolation of the islands of Ono-i-Lau in the Lau group will continue to be limiting factor for its people.

These were the words of the Tui Ono, Asaeli Tawawili commenting on their 20-year development plan.

He said the location of the islands will delay works on a number of projects.

"The isolation of the islands will continue to be a limiting factor, in terms of transport costs and the availability of raw materials, in the implementation of projects on the islands, which will impact the timely completion of projects," Mr Tawawili said.
Mr Tawawili said his people are to strive to find ways for new economic opportunities for those on the islands to address the drift of the tikina's population from the islands to urban centres.
"We should be proud of being an Ono-i-Lauan and should protect our identity, language, culture, tradition and values.

Leadership at all levels of the community is vital for advice and directing the people towards unity in the development of the islands," he added.
Ono-i-Lau to Remain in Fiji
Fiji Sun News - 9 July 2010
The people of Ono-i-Lau in the Lau Group will never move to Tonga as initially suggested, district advisor Anare Jale said.

“We have no plans of moving,” Mr Jale said.
In 2008, a faction of the people of Ono-i-Lau suggested that Ono-i-Lau breaks away and joins Tonga.
Mr Jale said that will never happen.
“Our culture and tradition may be the same as the Tongans but we remain as Fijians and we will continue to do so,” he said.
Ono-i-Lau is the farthest island in the Lau Group and is located close to Tongatapu in the Kingdom of Tonga. It was for this reason that the people of Ono-i-Lau chose to sail to Tonga to do their shopping before the enforcement of maritime borders.

As they launch their Development Plan at the two-day celebration that came to a close in Valelevu on Saturday, part of it was to promote the Ono culture and spirit of community and unity among all the people of Ono.
The celebration will now become an annual event, says r Jale, who is the chairman of the Ono-i-Lau Development Plan Committee.

A property worth $250,000 will be bought by the people of Ono-i-Lau to be their headquarter in Suva.
The fundraising to collect money for the headquarter was done in a two-day Ono-i-Lau Day at the Valelevu grounds in Nasinu last week.
Their development committee chairman Anare Jale said the facility would also be used as a business entity.
“It will be used as our meeting place for women, youths and so forth. We have $50,000 already with us and we set our target of achieving $200,000 from this fundraising,” Mr Jale said.
This is part of their development plans as they try to promote the Ono culture and spirit of community and unity among all Ono-i-Lauans by 2012.
Mr Jale said they wished to sustain the integrity of Ono-i-Lau culture and traditions and to effectively promote interest among their youths in regard to the preservation of their heritage by 2020.
“Youths are taught to perform the meke and all traditional dances, especially those living on the main land because we do not want the erosion of culture,” he said.
Yesterday's event saw entertainments provided by youths of all the villages of Ono-i-Lau who are living on Viti Levu.
Foods used during the event were shipped from the island.
The fundraising was opened by those living in Australia and the United States of America.

Fijians told to Sell their Traditional Souls for Progress - Bainimarama 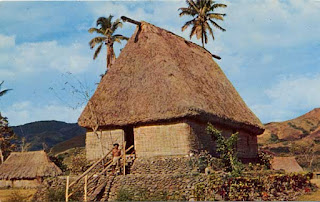 Church and traditional obligations has been one of the main concern dragging us backwards says Prime Minister Commodore Voreqe Bainimarama.
Speaking to the people of Naitasiri, Bainimarama says church event like the annual Methodist Church conference and other traditional affairs often slow down our economical development especially for the indigenous Fijian.
The Prime Minister says he did not want to speak ill of the church but says changes are needed for the betterment of the people.
Bainimarama says it is time to put away with some of these obligations which has been one of the causes of poverty and deprived us from leading a healthy and wealthy life.
Report by : Sekope Toduadua