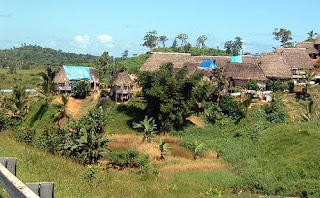 Only six villages in Fiji have legally proclaimed and gazetted their village boundaries with the Native Lands Commission and the Native Land Trust Board. 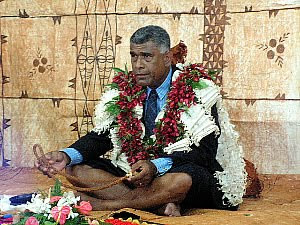 THE State has been asked to clearly demarcate provincial boundaries of Macuata and Cakaudrove, to remove the disagreements and tension in a village confused about the province it belongs to.
Ratu Peni Vukicanavanua told Commodore Voreqe Bainimarama at a recent meeting that the unclear boundary between the two provinces was causing confusion at Batiri Village.
Batiri Village has two of almost everything ù village headmen, development plans, village meetings and conch shells ù as one side swears allegiance to Macuata and the other to Cakaudrove.
The village sits on the border of Cakaudrove and Macuata outside Seaqaqa.
Disputes still exist between Yavusa Batiri ù which believes they belong to Macuata ù and Yavusa Seaqaqa ù which believes they belong to Cakaudrove.
This is in spite of a village meeting earlier this year where the Roko Tui Cakaudrove Ro Aca Mataitini told all the villagers they owed allegiance to Cakaudrove.
Ro Aca had warned villagers to unite and to gracefully accept they were part of Cakaudrove.
"There was confusion because from the period up to 1929 they were part of Seaqaqa which falls within Macuata province," he said.
"But when provincial division were made they became part of Cakaudrove yet one side of the village especially those that belong to the Yavusa Batiri continued to pay allegiance to Macuata.
"It caused divisions in the village, caused verbal confrontations and almost ended in physical assaults with those from the Yavusa Seaqaqa.
"It can't be this way because the government will only recognise one village headman and if the differences continue then development will bypass Batiri."

Colonial administrators outside Fiji's first government complex in Levuka
THE proposed village by-laws by the Ministry of i Taukei must be examined carefully to take into consideration, the impact of the Vola ni Kawa Bula (VKB) on Fijian society and its 'snowball' effect of chiefly and land disputes, on community development.
Otherwise, the inability of village leaders to manage change and development may transform from the 'frying pan into the fire'.
The VKB is an import from post colonialism.
It is a register of indigenous Fijians maintained by the Native Lands Commission (NLC).
It was introduced by the colonial administration to determine land ownership.
In the 19th and early 20th century, when Fijians were selling land for others who couldn't defend themselves or, out of attraction for firearms, there was so much confusion over land rights that traditional practices were abandoned.
In response, the Colonial Administration registered land ownership by 'mataqali' or sub-clans.
Ratu Savenaca Seniloli, a Baun chief who recorded boundary claims in 1903 appealed to the Governor against the 'mataqali' because it was a western concept and that the 'tokatoka' or household was more appropriate. (France, 1969).
Furthermore, the VKB, as noted by Fijian writers like the late anthropologist Dr Rusiate Nayacakalou and academic Dr Alumita Durutalo brought rigidity to a Fijian way of life that was traditionally mobile and a chiefly system that was earned and not inherited.
Some members of Fijian society have benefited from the VKB by an elevation from 'lesser to higher role'. Others had to abandon their traditional roles because they did not meet the VKB criteria of seven social task roles of chief, spokesperson, carpenter, fisherfolk, warrior, priest and administrator.
Therefore, those who belonged to the Melanesian characteristic tribe of elders were conditioned by the process of VKB to fit themselves into the polynesian hierarchical system of local governance which was prevalent in Eastern Fiji and adopted social task roles mentioned above that were not traditional.
The following is a present day consequence of the 'one size fits all' concept of the VKB;
Earlier this year, I learnt of a village dispute where some elders argued over the order in which the ceremonial cup of yaqona should be consumed.
The assistance of the NLC was sought and officials visited the villagers to facilitate discussions.
During the meeting the officials based on information recorded in the NLC asked the villagers as to who held the positions of chief, spokesperson, priest and warrior.
There was confusion over these roles and sitting arrangement so that by the end of the day after the meeting, the villagers were more confused than before the arrival of the officials from the NLC.
Traditionally, the village was a tribe of elders with a spokesperson whose social task role was called the matanivanua.
This role changed to chief under the VKB registration in the 1920s.
The demarcation of household sites in the village today indicates a circle of tribal elders while the spokesperson and adopted households sit outside the circle.
The question I would ask the proposers of the village by-laws to ponder is: "How can I best apply justice to a people who are victims of social engineering by a foreign system that their leaders have failed to address in line with change and development?"
These are the personal views of the author.
http://www.fijitimes.com/story.aspx?id=153613
Posted by SDL Consultancy at 2:10 PM 0 comments