Magic waters of Rokovuaka in Ra 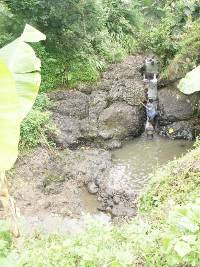 In a letter to FHL's managing director Sereana Qoro on Thursday, Ro Teimumu said FHL was conceived by the Great Council of Chiefs in 1984 at a time when Fijian confidence in participating in the commercial sector was at an all time low.

She added that the recent intervention on the company's corporate structure, executive positions and now the proposal to acquire BP South West Pacific Limited have caused concerns to Fijians, including the people of Rewa.

Ro Teimumu said a meeting scheduled for the province's development committee will discuss this move by FHL.

And Ro Teimumu has sought answers from Mrs Qoro on the proposed $190-million to buy BP Oil Pacific.

The acquisition was done last December, is the largest investment FHL has undertaken in its 24-year life.

This is the first time a oil company will be owned locally.

Attempts to get comments from Mrs Qoro yesterday were futile.
Posted by SDL Consultancy at 9:51 PM 0 comments

A landowning unit has claimed that Digicel failed to pay them their goodwill money for placing a transmitter in their land in Uciwai outside Nadi.
Head of the tokatoka Nasekula from Yako village in Nadi, Atikini Naga yesterday said numerous requests made to Digicel executives for a meeting was always turned down.

“Now we have no other option to shut down the site and maybe then they will listen to us,” said Mr Naga.

Last week police had to intervene after 12 villagers entered the transmitter site in their mission to close it down.

It was alleged that the villagers entered the site and removed batteries from the generator which disrupted services in Momi, Korovuto, the Mamanucas and other surrounding areas.

Mr Naga said they made some agreements with the company in October, last year where they were going to paid $120,000 as goodwill.

He said the land is still not leased by Digicel. He said they felt the company took advantage of their generosity.

Mr Naga said the problem started while the transmitter was still erected, when the Digicel delayed the payment of $13,000 on for the construction of the road.

Mr Naga said payments were only done after they stopped the road construction.

Digicel Fiji public relations executive Gillian Power said that the matter is currently being dealt with through the appropriate channels.

Natives warn on land leases
www.fijitimes.com - By SERAFINA SILAITOGA-Wednesday, March 18, 2009
MORE than 100 landowning units in a northern province have called on the State to sort out outstanding land issues or face the risk of failure in development projects.
One hundred and seven landowning units from Bua believe their cries over the past two decades to return reserve land, which Fiji Pine has used since the 1970s, have not been heard.
Bua Landowners Association spokesman Tevita Raiova said nothing had been done since their grievances were first raised in the 1990s. "We are tired of crying for our reserve land and it's time that the matter be straightened out," he said. "If nothing is done, then development projects for Bua will not prosper."
On September 12 last year, the Native Land Trust Board, through a Fiji Times article, admitted that landowners of Bua were not consulted when the Government started planting pine in the division 26 years ago.
NLTB spokesman Nimilote Naivalumaira said in the article that mistakes must be corrected and that the problems identified by the landowners were caused by acts of omission in the early years of pine planting.
Efforts to get comments from Fiji Pine chief executive Alec Chang proved futile.
Posted by SDL Consultancy at 1:19 AM 0 comments

IT is time for a serious review of the Fijian administration and its relevance to the nation and the indigenous people.

Recent reforms of State ministries and departments were conducted in an effort to increase efficiency, reduce expenditure and ensure the streamlining of services to the people.

In the case of the administration of the Fijian people, the costs of operating provincial offices far outweigh any possible benefit from maintaining facilities which provide for a particular racial group.

This administration has consistently called for the removal or references to race or the provision of benefits according to ethnicity.

Through the Rural Development Ministry, the State offers funding and technical assistance to people who live outside the urban areas.

These projects must be conducted according to the needs of the community after relevant analysis by experts.

Whether the beneficiaries of the projects are Indian, Fijian or some other ethnicity is irrelevant.

If a need exists, it is the duty of the State to see that these requirements are met from taxpayers' funds.

With the Fijian administration, a second, unnecessary tier of bureaucracy has been established to cater to the indigenous people.

Offices are maintained in the 14 provinces to ostentatiously care for landowners and minister to their needs.

With these offices are the accompanying costs of utilities, maintenance, staff salaries, administrative and operational costs.

Yet the needs of the indigenous community are fully catered for through services provided at the offices maintained by government departments and ministries. At provincial council meetings, matters raised by district representatives are referred to civil servants who must return to their offices, make inquiries and report back — sometimes six months later.

In truth, the Fijian administration is a relic of the colonial era, an un-needed layer of bureaucracy and a burden to the taxpayer.

We should not be forced to maintain a dual system of governance for reasons which are purely sentimental. The indigenous people have access to infrastructure and State-provided service. It is their duty to take the first step and approach government officers for assistance.

Addressing these issues through a system which caters only to Fijians wastes time and money.

It also encourages people to think in terms of ethnicity or breeds a mistaken sense of greater self-importance in members of the indigenous community.

The time has come for them to realise that circumstance has brought us together as a nation of one people.

We must all work hard for success. In this endeavour, ethnicity and religion are irrelevant.

It's time for the indigenous people to cast off the shackles of the past and enter the future under their own steam.
Posted by SDL Consultancy at 11:10 PM 0 comments

There are 14 provincial roko serving at provincial councils nationwide.

He said the aim of the reshuffle was to ensure that no roko served in his or her own province.

When contacted at least one roko Tui said the last he understood was that he would continue his current post.

Roko Tui Tailevu Joape Nalatu, who is from Nadroga, referred queries to the Fijian Affairs Board.

But he also confirmed that he would stay on this year at the Tailevu Provincial Council.

Roko Tui Namosi Samisoni Tuilawaki said he was on long-service leave and not aware of any changes by the ministry.

"I am on leave and will start some time next week. I have not heard or been informed on that issue," Mr Tuilawaki said.

The denial came after some concern that the ministry was considering following the example of the Local Government Ministry, which replaced mayors with administrators last month
Posted by SDL Consultancy at 12:08 AM 0 comments